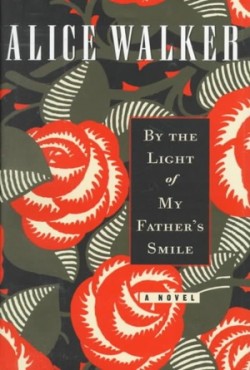 A family from the United States goes to the remote Sierras in Mexico–the writer-to-be, Susannah; her sister, Magdalena; her father and mother.  And there, amid an endangered band of mixed-race Blacks and Indians called the Mundo, they begin an encounter that will change them more than they could ever dream.  Moving back and forth in time, and among unforgettable characters and their stories, Walker crosses conventional borders of all kinds as she explores in this magical novel the ways in which a woman’s denied sexuality leads to the loss of the much prized and necessary original self; and how she regains that self, even as her family’s past of lies and love is transformed.

By the Light of My Father’s Smile  presents, as Alice Walker puts it, “a celebration of sexuality, its absolute usefulness in the accessing of one’s mature spirituality, and the father’s role in assuring joy or sorrow in this arena for his female children.”  It explores the richness and coherence of alternative culture, experience of sexuality as a celebration of life, of trust in Nature and the Spirit, even as it affirms the belief, as Walker says, “that it is the triumphant heart, not the conquered heart, that forgives.  And that love is both timeless and beyond time.”

“ Alice Walker in this, the most beautiful, the most compassionate, the most sensuous of novels, has created a masterpiece.  Flawless ”
–The Times

By the Light of My Father’s Smile  is Alice Walker’s first novel in six years–a stunning, original, and important book by “one of the best American writers of today.”
–The Washington Post

“[THIS] POWERFUL STORY IS ABOUT LOVE, FORGIVENESS, PASSION AND BEING TRUE TO YOURSELF.”
–Detroit Free Press

“HUGELY ORIGINAL, BY THE LIGHT OF MY FATHER’S SMILE HAS MORE THAN A HINT OF INCANTATORY MAGIC ABOUT IT. . . . Light explores what happens–to an entire family–when a daughter cannot forgive her father for a single, hypocritical, soul-crushing act. It explores the dangerous bonds of fidelity between sisters, lovers, memories. . . . Walker’s language is sensual and at the same time delightfully precise. . . . Political, immodest, astonishing by turns, [this novel] once again demonstrates Walker’s gigantic talent.”
–The Baltimore Sun

BY THE LIGHT OF MY FATHER’S SMILE “FULFILLS A READER’S NEED FOR WISDOM. . . . WRITTEN IN AT LEAST TWO DIMENSIONS AND ACROSS DECADES.”
–Los Angeles Times Book Review

“A Celebration–Walker’s narrative chronicles the lives, loves and deaths of the Robinson family–.Its characters attempt to mend broken hearts, stifled dreams, war-torn bodies and weary spirits–.The novel presents the greatest quest as that to the realm of grace and forgiveness in the midst of spiritual turmoil, self-delusion and intimate betrayal.”
— Miami Herald

“With explicit sexual flair and fluid, descriptive prose, Walker explores the function and dysfunction of sexuality, as it relates to the growth of the human spirit. She glides unabashedly into her storytelling and her personal purpose without hesitation or a moment’s regret–.Her descriptive prowess and fast-paced plotting make each chapter a joy to read. Her unyielding passion and purpose make this a hard book to put down.”
— The Denver Post

“Lyrical and profound–Examines how a family’s sexuality–and denial of same–turns its daughters into the women they are, and want to be.”
— Glamour

“Ultimately, this is a novel of the late 20th century, a tale of healing and forgiveness, a contemplation and meditation on the meaning of death, and a celebration of the spiritual nature of sex.”
— The Philadelphia Inquirer

“In By the Light of My Father’s Smile, Alice Walker offers us a gift of different flowers that beautifully bloom in memory, in music and in meaning. And she speaks to us in every voice. Every culture. In the now and always–Journey with Alice. Park judgement in long-term. Travel the distance in this memory-music-meaning book.”
— San Antonio Express-News

“[A] luminous ending–Ultimately soothes us with the hope that forgiveness is ever possible and life goes on.”
— Atlanta Journal & Constitution