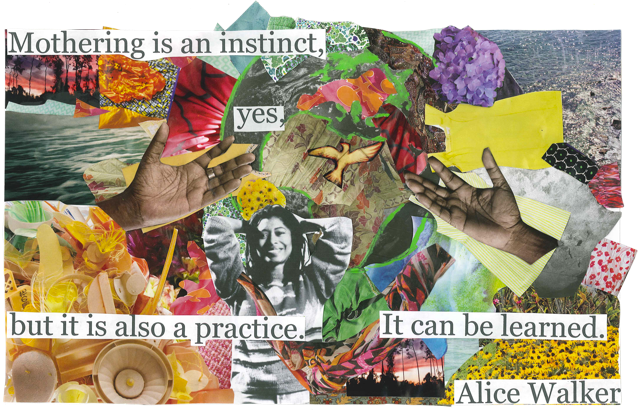 From “Democratic Motherism” in The world Will Follow Joy:  Turning Madness Into Flowers

Alice Walker is an internationally celebrated writer, poet and activist whose books include seven novels, four collections of short stories, four children’s books, and volumes of essays and poetry.  She won the Pulitzer Prize in Fiction in 1983 and the National Book Award.

Walker has written many  bestsellers; among them, The Temple of My Familiar (a wisdom tale that originates in prehistory);  By The Light of My Father’s Smile ( sexuality and forgiveness as paths of healing); Possessing the Secret of Joy (1992), which explores the effects of female genital mutilation on one woman’s psyche as well as her body (she becomes a patient of a fictional Carl Jung). This novel led to the 1993 book and documentary film Warrior Marks: Female Genital Mutilation and the Sexual Blinding of Women, both collaborations with British-Indian filmmaker Pratibha Parmar, and We are the Ones We Have Been Waiting For: Inner Light in a Time of Darkness. (Meditations on spiritual and political issues).

Her other novels are: The Third Life of Grange Copeland (one family’s struggle to survive the  sharecropping system – slavery under another name – in the South), Meridian (a spiritual biography of The Civil Rights Movement), The Color Purple (liberation from enforced, male dominant, religion and thought; also poses the question never asked by societies in which they occur:  what becomes of the children whose parents are lynched/assassinated?) and Now Is the Time To Open Your Heart (a couple on the verge of separating decides to live together,  fully in the present, despite  awareness of the universal unraveling of societies around the globe).

Her short story collections include: In Love & Trouble: Stories of Black Women  ( poor and marginalized women of color make choices reflecting their status in life) and You Can’t Keep A Good Woman Down  (the spirit of woman rises with the smallest encouragement; one of our most valuable human contributions) and The Way Forward Is With A Broken Heart (after a painful divorce, a woman opens herself to the heartbreak offered by the world,  and loves the world enough to persevere).

There are seven volumes of poems. Among them: Once, Revolutionary Petunias, Horses Make a Landscape Look More Beautiful, Good Night, Willie Lee, I’ll See You In the Morning, Her Blue Body Everything We Know, Absolute Trust In the Goodness of the Earth, Hard Times Require Furious Dancing, and The World Will Follow Joy: Turning Madness Into Flowers.

In Search of Our Mothers’ Gardens: Womanist Prose examines the creative inheritance of one’s maternal line, and how our own contributions,whether political, activist, or poetic connect on this foundation. Essays in Living By the Word  reflect Walker’s Earth and Womanist based spirituality.  Anything We Love Can Be Saved:  A Writer’s Activism ( explores activism as a source of inspiration), The Same River Twice: Honoring the Difficult chronicles the adventure of having a film made of her novel The Color Purple and weathering storms of censorship, banning, criticism, and verbal attack.

Her work has been translated into more than two dozen languages, and her books have sold more than fifteen million copies. Along with the Pulitzer Prize and the National Book Award, Walker, in 2006,  was honored as one of the inaugural inductees into the California Hall of Fame. In 2007, her archives were opened to the public at Emory University in her birth state of Georgia. In 2010 she presented the keynote address at The 11th Annual Steve Biko Lecture at the University of Cape Town, South Africa, where she met the beautiful sons of Steve Biko, and was awarded the Lennon/Ono Peace Grant in Reykjavik, Iceland, where she met John Lennon and Yoko Ono’s “beautiful boy” Sean Lennon. (Walker donated this latter award to an orphanage for the children of AIDS victims in East Africa, The Margaret Okari Foundation in Kisi, Kenya).  She served as jurist  (2010 and 2012)for two sessions of The Russell Tribunal on Palestine.  In Cape Town, South Africa, and NYC, New York.

Recent works are: Overcoming Speechlessness: A Poet Encounters the Horror in Rwanda, Eastern Congo and Palestine/Israel; Hard Times Require Furious Dancing; The World Has Changed: Conversations with Alice Walker; and The Chicken Chronicles: Sitting With the Angels Who Have Returned With My Memories, a Memoir. She also writes regularly on her blog site at alicewalkersgarden.com.

Two new books were presented in Spring of 2013:  The Cushion in the Road:  Meditation and Wandering as the Whole World Awakens to Being in Harm’s Way; and The World Will Follow Joy: Turning Madness into Flowers,  poems.

Walker has been an activist all of her adult life, and believes that learning to extend the range of our compassion is activity and work available to all. She is a staunch defender not only of human rights, but of the rights of all living beings. She is one of the world’s most prolific writers, yet continues to travel the world to literally stand on the side of the poor, and the economically, spiritually and politically oppressed. She also stands, however, on the side of the revolutionaries, teachers and leaders who seek change and transformation of the world. Upon returning from Gaza in 2008, Walker said, “Going to Gaza was our opportunity to remind the people of Gaza and ourselves that we belong to the same world: the world where grief is not only acknowledged, but shared; where we see injustice and call it by its name; where we see suffering and know the one who stands and sees is also harmed, but not nearly so much as the one who stands and sees and says and does nothing.”

Collage by Alexis Pauline Gumbs, one of the authors of the important forthcoming book:  Revolutionary Mothering: Love on the Frontlines