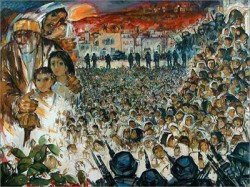 Palestine is no longer a dirty word

“Can you guage an event’s success even before it starts?

That’s the question I have been asking myself since I landed in New York a few days ago.

I am here to organize, with many other comrades, and take part in, the 4th session of the Russell Tribunal on Palestine that will take place on 6-7 October.

Since we arrived, things have got better and better… and better.

The huge, historic venue we rented for the event, the great hall at Cooper Union, where leader of the abolitionist movement Frederik Douglass gave his emancipation speech, sold out in a couple of weeks. More than 900 people from all over the globe will attend the session. In the last week, we have been flooded by emails from people, including some who are well known, asking us for tickets. We could have filled this venue twice over.

US activists are all saying in unison: ‘This is going to be huge. This is going to be an historic event, a milestone for Palestine solidarity in the US.’ The buzz around the tribunal is amazing. Even the mainstream press seems to have caught the bug. Time magazine, Le Monde, Le Monde Diplomatique, mainstream Swiss newspapers, The Nation, The Huffington Post, Democracy Now, Al Ahram, Al Jazeera English and the New York Times are all coming to cover the session.

On top of this, we now have personalities contacting us directly to be a witness of this event. World- renowned French philosopher Etienne Balibar will be in the room, Zwenlizima Vavi, one of the most respected and liked public figures in South Africa will also be there, Mariam Said, wife of late Palestinian Icon Edward Said will be present; US actor John Cusack told us he might pop in.

Deep down, I know that it is not going to stop. I have got this feeling that more and more people are going to join the struggle for justice that the Palestinians have been fighting for decades. Palestine is not a dirty word anymore and will soon be fashionable. Alice Walker, Angela Davis, Roger Waters, Ronnie Kasrils, Michael Mansfield, Stephane Hessel, Mairead Maguire, Cynthia McKinney, John Dugard, Miguel Angel Estrella and Dennis Banks, our jury members, will soon be joined by many more personalities.

Remaining silent will, in the short-term future, no longer be an option.

The ones that crossed the picket line and ignored the Palestinian call for boycott, will have their place in history and will also be remembered – for all the wrong reasons. People will always be there to remind them and ask them: ‘Hey, Red Hot Chili Peppers, Bob Dylan, Elton John, Madonna, where were you in 2012, when Palestinians were suffering from apartheid, persecution, and colonialism?’

On Saturday 6 October, the Russell Tribunal on Palestine, the people it represents and the hundreds of people that have made this possible, will write history. A people’s history.

By addressing the US and UN’s role in Palestine, the tribunal’s goal is to go back to the root of the conflict and help globalize the Palestine question.

The fact that close to a thousand people, from all walks of life, coming from all around the world are, for two full days, going to be together, hand in hand, to talk about one thing and one thing only, Palestine, is something that should be celebrated and remembered.

It is a victory in itself.”

Go to this article on the New Internationalist Blog